Bhangra/Gidha - Bhangra began as a part of harvest and vaisakhi festival celebrations, and found its way to the performance stage after the division of the Punjab in 1947. The Punjabi dance performed at this time in ecstasy with the beat of Dhol came to be known as Bhangra.

The tradition spread slowly to other parts of the region and developed into a unique folk dance form. Bhangra has come of age and is now performed at every major celebration and in clubs etc.

Bhangra has developed as a combination of dances from different parts of the Punjab region. The term "Bhangra" now refers to several kinds of dances and arts, including Jhumar, Luddi, Giddha, Julli, Daankara, Dhamal, Saami, Kikli, and Gatka. Jhumar, originally from Sandalbar, Punjab, comprises an important part of Punjab folk heritage. It is a graceful dance, based on a specific Jhumar rhythm.

Dancers circle around a drum player while singing a soft chorus. A person performing the Luddi dance places one hand behind his head and the other in front of his face, while swaying his head and arms. He typically wears a plain loose shirt and sways in a snake-like manner. Like a Jhumar dancer, the Luddi dancer moves around a dhol player. Women have a different but equally exuberant dance called Giddha. The dancers enact verses called bolis, representing a wide variety of subjects - everything from arguments with a sister-in-law to political affairs. The rhythm of the dance depends not only the drums, but also on the handclaps of the dancers. Julli is a dance associated with Muslim holy men called pirs and is generally performed in their hermitages. Typically the dancers dress all in black, and perform Julli in a sitting posture, but it is sometimes also done around the grave of a preceptor. Julli is unique in that one person, alone, can perform the dance if he so desires.Daankara is a dance of celebration, typically performed at weddings. Two men, each holding colorful staves, dance around each other in a circle while tapping their sticks together in rhythm with the drums. Dancers also form a circle while performing Dhamal. They also hold their arms high, shake their shoulders and heads, and yell and scream. Dhamal is a true folk-dance, representing the heart of Bhangra.

Women of the Sandalbar region traditionally are known for the Saami. The dancers dress in brightly colored kurtas and full flowing skirts called lehengas. Like Daankara, Kikli features pairs of dancers, this time women. The dancers cross their arms, hold each other's hands, and whirl around singing folk songs. Occasionally four girls join hands to perform this dance. Gatka is a Sikh martial art in which people use swords, sticks, or daggers. Historians believe that the Sixth Sikh Guru started the art of Gatka after the martyrdom of Fifth Guru - Shri Guru Arjan Dev Ji. Wherever there is a large Khalsa Sikh population, there will be Gatka participants, often including small children and adults. These participants usually perform Gatka on special Punjabi holidays. In addition to these different dances, a Bhangra performance typically contains many energetic stunts. The most popular stunt is called the moor, or peacock, in which a dancer sits on someone's shoulders, while another person hangs from his torso by his legs. Two-person towers, pyramids, and various spinning stunts are also popular.

The Dhol is one of the few percussion instruments in the world that draws people to the dancefloor whenever it is played. It is the king of Punjabi instruments, it is the soul of Bhangra and without it, Bhangra is incomplete. Bhangra performers have huge respect for the dhol and it is for the dhol that he dance is performed. The dhol is a barrel-shaped instrument, made from a shell of hollowed-out mango or sheesham wood, with the treble on the right and the bass on the left. Historically,both sides of the drum were made from goatskin, but today, plastic is sometimes used for one of the sides. 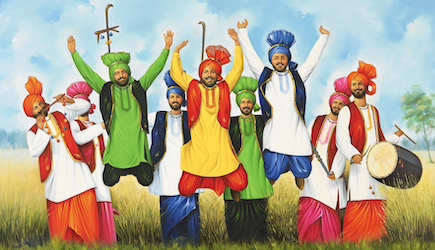 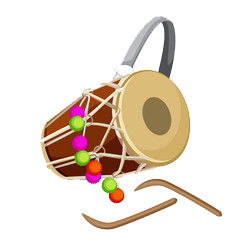 Two drumsticks are used to beat the drum. The tili is a thin cane stick; the dagga is a crooked wooden stick: their contrasting shapes and sizes suit the different properties of each side of the drum. It is the rhythm they create that is the most significant feature of dhol playing. Many Punjabi homes in own a dhol and it is very popular with children, yet due to a lack of experienced dhol players and teachers around the World, most students learn only a couple of basic tunes. Nevertheless, even the inexperienced players are often good enough to bring the whole street out to dance!

Each beat of the dohl in Bhangra dance music introduces a different dance step. The beat is then followed by a tora, a means of shifting from one beat to another without a pause. Unfortunately, no effort is made in the scope of this study to account for all variations in different beats, which conceptually- in a perfect world, are the best indicators.

A magical instrument! This Punjabi woodwind instrument, also called a jori/ ngoza, resembles a pair of wooden flutes which the musician plays by using three fingers on each side. A very challenging instrument to play, the sound is generated by breathing into it rapidly; the quick recapturing of breath on each beat creates a bouncing, swing rhythm. 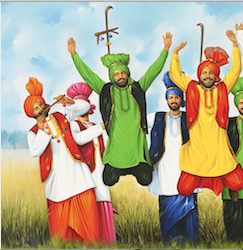 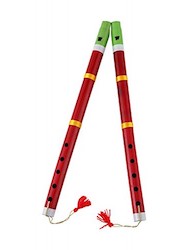 The pairing of the algoza with the dhol in a piece of music produces a great sound that makes everyone want to dance! The algoza is generally used as a folk instrument and Punjabi folk singers use it to play traditional music such as Jugni, Jind Mahi, Mirza. However, it is also a popular choice among Canadian musicians for making contemporary Bhangra music.

The chimta is often used in popular Punjabi Bhangra music. It is a percussion instrument made of two long, flat pieces of metal (usually iron) with pointed ends to which several rings are attached. The rings are plucked in a downward motion to produce tinkling sounds. 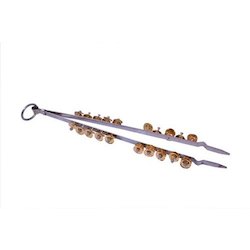 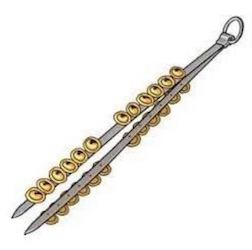 The tumbi is a traditional Punjabi string instrument. Its one string can produce both high and low tones. The body of the instrument is made from various types of wood over which a skin is stretched and strings are attached. It is played with the continuous flick and retraction of the forefinger. Famous Punjabi singers of traditional songs, such as Mahiya, Challa, Jindua and Jugni, have used the tumbi. 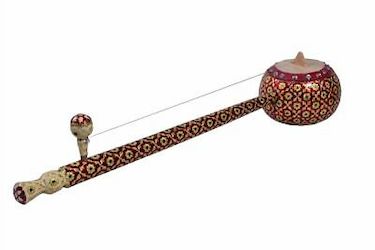 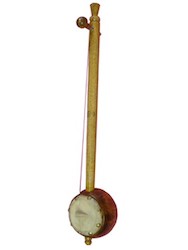 Sarangi is a popular bowed instrument in Punjab. It is wooden instrument about two feet long, cut from a single log covered with parchment. A bridge is placed in the middle. The sides of the Sarangi are pinched so as to bow it. The instrument usually has three major strings of varying thickness, and the fourth string is made of brass, used for drone. 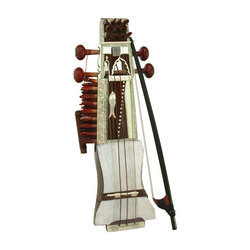 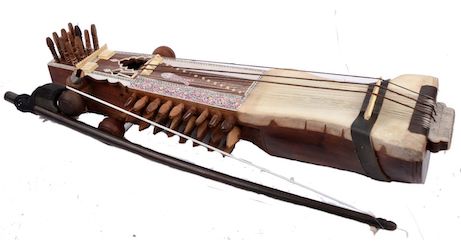 Bugchu is a stringed instrument made of dried gourd (Ghia). A piece of skin is mounted on one side of the hollowed gourd while the other side is kept open. A gut string (Tand) is crossed through the centre of the skin and a small piece of wood is tied to the end of the string, which passes through the body of the gourd. To maintain a drum-like rhythm, the string is stretched or loosened while playing. 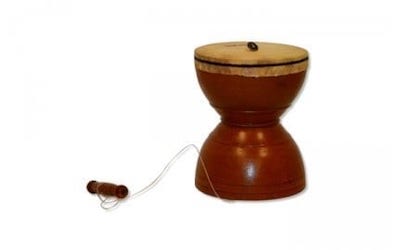 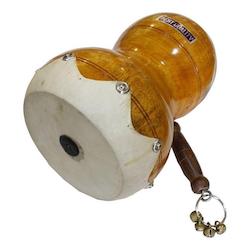 Dhad is a small percussion instrument of the Damru style. Held in one hand, it is struck on either side, with the other hand holding the skinned sides vertically or horizontally. This instrument has been very popular with the Dhadies, who sing traditional ballads of brave warriors and heroes drawn from history. 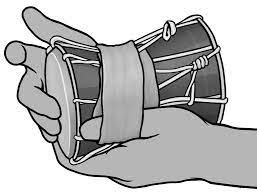 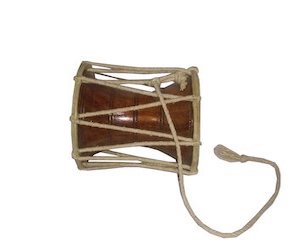 The simple earthen pitcher serves as a musical instrument in a number of folk songs. The Gharaa player strikes its sides with rings worn on fingers of one hand and also plays on its open mouth with the other hand to produce a distinct rhythmic beat. 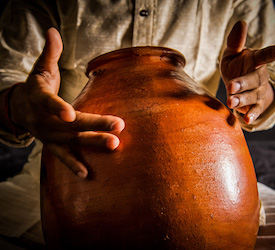 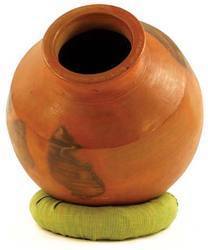